We'd like to thank all those who took part in the open beta and contributed with bug reports and general feedback. We hope you can now begin to fully enjoy the various new features which are included within this update. So, what can you expect to find in the 1.38 update ETS2? Lets us give you a quick recap of the most significant changes.

With Idaho's release just around the corner and with lots of testing, feedback, fixing and fine-tuning, we are excited to announce the arrival of update the 1.38 for American Truck Simulator!

We'd like to thank all those who took part in your bug reports, opinions, and general feedback. We hope you can now begin to fully enjoy the various new features which are included within this update. So, what can you expect to find in the 1.38 update ATS? Lets us give you a quick recap of the most significant changes.

We love to bring you new game updates, especially when they contain some cool features that you have requested for a long time; and we really appreciate all the help our great community provides with testing each new update during the open beta stage. Today, we'd like to invite you to help us finalize the features that are coming to American Truck Simulator along with the next update. Please read below, and if you like living on the edge, get ready to join the 1.37 Update Open Beta.

As we were all busy with Pink Ribbon event, some of you may not have anticipated the approaching update. It brings some new treats, but the main reason is DirectX change and preparation for the Road to the Black Sea map expansion. Let's go through the list of Euro Truck Simulator 2 Update 1.36 Open Beta together.

A word of warning first - avoid this Beta if you are planning on completing any more deliveries for the Pink Ribbon Event - it's not supported on 1.36 and you WON'T be able to go back to any older version of the game with a profile modified by the 1.36 version of the game. There are core changes, including a different save version, so back up the profiles that you want to keep (do a manual back up just to be sure) using on 1.35 or older versions.

A big focus of the update is on DirectX 11 (11.1 to be exact). We've decided to drop support for DirectX 9 for the sake of faster and easier development. So from Update 1.36 onwards, our games won't be compatible with systems running on DirectX 9.

As we didn't talk much about this update, except on yesterday's stream (you couldn't resist, could you Pavel?), we presume it's a little bit of a mystery to most of you - so let's go through the list before you try out the Open Beta for American Truck Simulator's 1.36 Update! 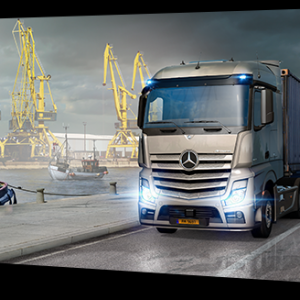